Press Release: Intro to the Trades Program to Begin in Pittsburgh

Press Release: Intro to the Trades Program to Begin in Pittsburgh 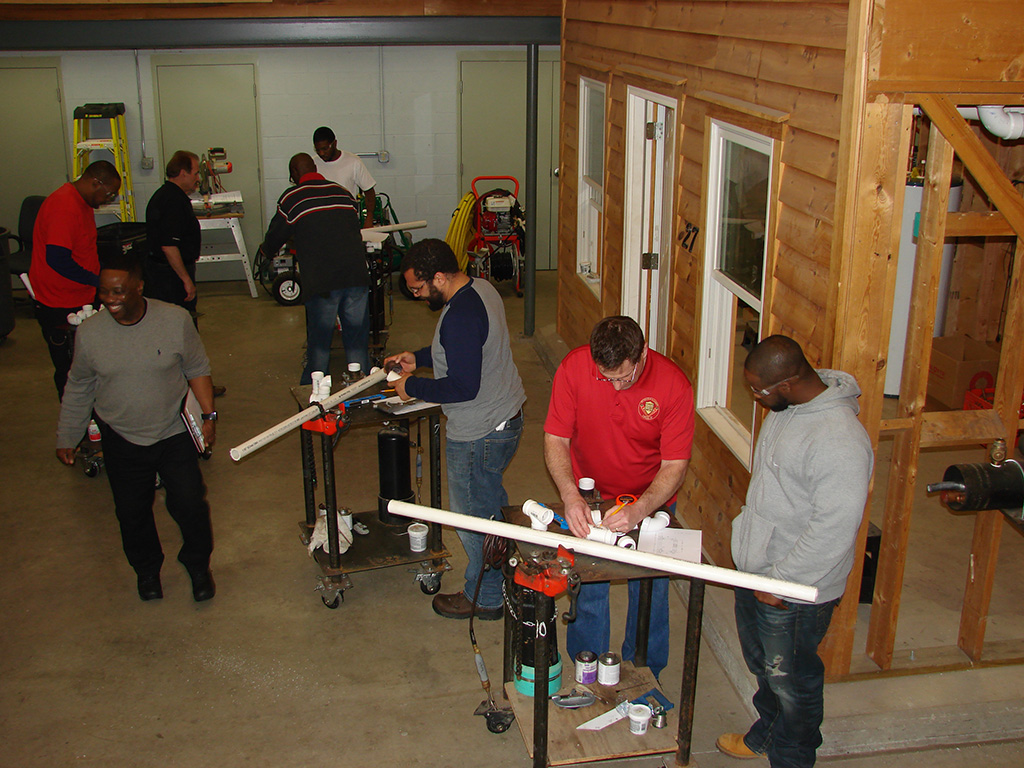 Pittsburgh, PA — Pittsburgh Gateways, a non-profit economic development support organization and owner of the Energy Innovation Center (EIC) in the Lower Hill District, is launching its “Intro to the Trades” Program in concert with the Builders Guild of Western Pennsylvania and 16 of the region’s Joint Apprenticeship Training Centers (JATCs). This six week training program is designed to help prepare and introduce men and women primarily from local urban neighborhoods to the complex and demanding union building and construction trades industry.

“Since the closing of the Connelley Vocational Trade School in 2004, too many young men and women in the City of Pittsburgh have not had the opportunity to truly understand what the construction industry is all about, including what it has to offer in terms of rewarding, family-sustaining careers,” said Jason Fincke, executive director of the Builders Guild. “There is so much more to construction than simply using basic hand tools. It takes an understanding and appreciation of the physical skills and mindset that is needed for any contractor to be successful. With the ‘Intro to the Trades’ Program, we are hopeful that we can introduce more local residents to our industry and have them pursue their education and gain entry into one of our outstanding training programs.”

The first class of students will enter the “Intro to the Trades” Program on February 17, 2016, during which time they will begin to receive classroom training at the EIC on a variety of safety and other work-related topics, such as emergency preparedness, protective equipment, proper lifting, potential workplace hazards, and blueprint reading. They will also take classes on communication in the workplace, decision making, resume writing, working independently as well as on teams, and on time management.

“Before you can begin to work in the field, you have to know what to expect,” said Program Coordinator Ron Sapp. “You also have to know what is expected of you, particularly in terms of work ethic and attitude. If you think you can just pick up a hand tool and go to work, you won’t succeed.”

Apprenticeship representatives for the Roofers (Local 37), Painters, Drywall Finishers and Glaziers (District Council 57), and the Boilermakers (Local 154) will also spend time at the EIC educating program participants about their trades and all that they involve.

“The intent of the program is to introduce and expose groups of men and women from the community who have the desire and ability to work in the demanding construction industry, but have not yet identified which trade to pursue or fully understand what such a profession requires and entails,” said Bill Miller, Vice President and chief operating officer for Pittsburgh Gateways. “We are looking to sustain a program that generates meaningful results for everyone’s benefit—the worker, the employer and the community.”

To also help participants gain entry into a JATC, much of the time will be spent on learning building trades math, which primarily involves an understanding of geometry and algebra. Other application procedures will also be explained in detail to help participants after they complete the program.

“There are no guarantees that everyone in the program will gain entry into a Joint Apprenticeship Training Center,” Mr. Fincke said. “After getting a better understanding of what construction requires, there is also no guarantee that the participants will want to pursue a career in construction, but at least they will be better able to make an informed decision.”

Because so much of Joint Apprenticeship Training occurs on the worksite, the JATCs only take in as many apprentices as they can put to work each year. In 2016, the region’s centers are expected to enroll approximately 1,200 apprentices, which is the highest number of apprentices taken in recent memory. Because of an aging workforce and expected construction activity, that number will likely remain high for at least the next five to ten years.

“The amount of commercial and industrial work on the horizon is very promising,” Mr. Fincke said. “Because of the scope and expertise required, most of that work is performed by union building trades workers. We are proud of our workers and of our contractors who recognize the value of quality construction and a diverse workforce.”

To participate in the “Intro to the Trades” Program, applicants must be at least 21 years old, have two years of work experience, have a valid Pennsylvania driver’s license (or have an application to obtain one in process), be legally authorized to work in the United States and be willing to submit to a background check. Classes will be held three times a year with class sizes of approximately 20 participants.

Interested participants can apply on line at www.eicpittsburgh.org. There is no fee to participate.

The EIC is an urban complex on Bedford Avenue this is being used to promote energy sector research and innovation, while creating pathways to job creation, entrepreneurship and urban revitalization.